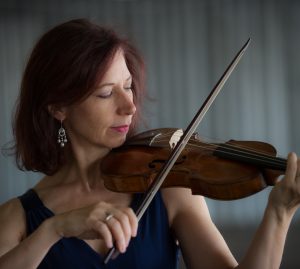 As a longtime performer and teacher of both violin and Baroque dance, Les Délices’s Julie Andrijeski sees “dance as a visual representation of the musical form, its phrases, its gestures, its uniqueness.  It’s music in 3-D.  I like the challenge of embodying the music in this way, using subtle movements of not only the feet but also the eyes, hands, head, and subtle shading of the body to move the emotions of both performers and listeners.”


Elena first discovered baroque dance as a graduate student at Case Western Reserve University, where Julie Andrijeski’s baroque dance class is a rite of passage for many musicians. Students learn the fundamentals of 17th century dance notation and the movements of the most common baroque dance steps. Says Julie, “The goal in my classes is not to perform each movement of each baroque step perfectly (although I do get picky in my semester-long courses), but to feel the flow, or “cadence,” of each specific dance type through a sense of action/reaction; motion/stasis; tension/release.” 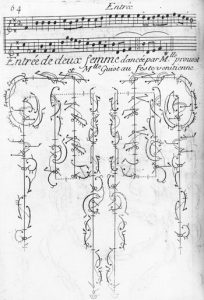 When asked about what initially sparked her passion for baroque dance, Elena identified the “intriguing” and precise Beauchamp-Feuillet system of dance notation. Developed by French choreographers in the late 17th-century, the notation enabled dancers to preserve in immaculate detail the “steps and the floor patterns for the solo and duo dances that members of the aristocracy were expected to present at balls, as well as those danced primarily by professionals in theatrical performances.” Julie’s class at CWRU makes use of surviving examples of this notation, encouraging students to develop a working fluency of the symbols and their corresponding steps. For the Lully chaconne that opens the program, Elena will dance the original 17th century choreography as preserved in Beauchamp-Feuillet notation. 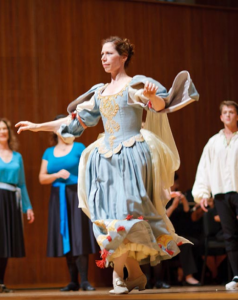 Andrijeski studied ballet in tandem with her violin lessons from a young age and owes her love of both music and dance to her mother, “a dance teacher, occasional pianist, and lover of opera.” Andrijeski reminisced, “From a young age, I would go with her to the dance studio, take my classes and then watch her teach.  I loved ballet but also took tap and a smattering of jazz, modern, folk dance, etc. By the time I was a high school senior, I was dancing at least four times a week and choreographing a few solos and duets for the end-of-year dance recitals.  Like now, I had a parallel life as a violinist; I began playing violin at around the same time I started dance and was equally busy with violin lessons, school orchestra, honor orchestra, and even played in the local professional Boise Philharmonic during my senior year.  When it came time to go to college, I chose to concentrate on the violin, and my dancing was put on hold. It was only when I took up the baroque violin in the late 80s that I began seriously dancing again.” When Julie chanced upon a baroque dance class on offer at Oberlin’s Baroque Performance Institute, she “jumped at the chance and was immediately intrigued not only with the art form itself but also with how much it taught me about the music I played.”

Both Elena and Julie stressed that while baroque dance requires a rigorous attention to posture and a focused approach to the various steps, the ultimate challenge is to find what Julie calls “a natural flow.” Julie writes, “Everything seems so artificial at first; but the more I dance, the more convinced I am that these seemingly artificial movements are merely enhancements of movements in the natural world—swaying trees, rustling meadows, flowing streams, blowing wind, walking, running, leaping.

Echoing Julie, Elena added, “the real challenge of baroque dance is to tell a story and draw your audience into the experience. I was very lucky to learn about baroque dance from Julie Andrijeski; she stressed the importance of that element from the beginning. There’s an artfulness to it that feels unnatural for a while, but when it’s done right it can be very compelling. I’m still working on it!”

Rebel’s Caractères de la danse is a tour-de-force of courantes, menuets, bourrées, chaconnes, sarabandes, gigues, rigaudons, passepieds, gavottes, and musettes, each with its own unique character. Premiered in 1715 with original choreography by famed dancer Françoise Prevost, Caractères remained popular throughout the 18th century, inspiring dancers to interpret Rebel’s score for themselves.

In Games & Grounds, Elena joins their ranks as she performs her original choreography for Caractères. Reflecting on the process, Elena said, “Choreographing Rebel’s Caractères de la danse was challenging but also really gratifying. I’ve only had occasional opportunities to create my own choreographies for baroque dance. Several years ago a violinist asked me to choreograph several movements of a Bach partita. Even though Bach was using the French baroque dance forms (and I absolutely believe in the importance of Bach interpreters understanding those original French forms), it was still a challenge to coordinate the sorts of gestures and phrasing that work naturally with the French music to the Bach.”

Rebel’s music, on the other hand, just begs to be danced to. “The real fun of the Caractères is the invitation to fully develop each short dance movement to have its own unique feel, its own unique sense of physicality. You have to switch characters on a dime, which is really challenging, and only really possible when the musicians are working equally hard to convey those characters. Fortunately the members of Les Délices are brilliant at that!” 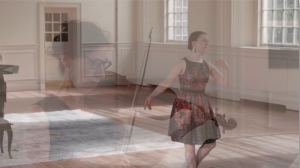