17 Aug Cleveland Ensembles Get Creative for the New Season 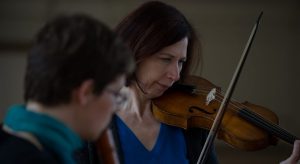 Safety and finances are the two most basic issues facing classical music ensembles embarking on fall concert seasons amid the coronavirus crisis.

Then there are matters that go deeper. Can ensembles address the pandemic through their programming? And can they show a commitment to racial diversity, continuing the movement that has gripped the field since the killing of George Floyd?

Two Cleveland-based early-music groups head into their respective seasons with their own fascinating and unique responses to all of those questions.

…Les Délices is also pursuing a dual course in its 12th season, but with two separate series to be streamed over the web. The four-program, pre-recorded Concert Series premieres on Oct. 22. That will run side by side — and at times overlap in theme and personnel — with a twice-monthly variety show known as SalonEra, beginning Aug. 24. – Jarrett Hoffman