16 Sep Behind the Scenes with Elaine Martone & Erica Brenner

With a slew of GRAMMY wins and decades of experience between them, Elaine Martone and Erica Brenner are friends, long-time colleagues, and essential Les Délices team members. With Artistic Director Debra Nagy and a host of other talented individuals, including recording engineer Andrew Tripp and Director of Photography Mathias Reed, Elaine and Erica shape the look and sound of each filmed Concert Series program. 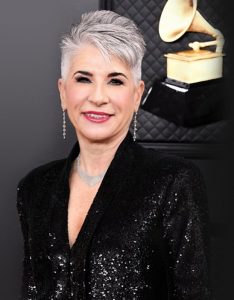 Elaine and Erica first met at the famed Telarc Records, where Elaine was Executive Vice President of Production and mentored Erica, who was Director of Audio Services.

Now both independent producers, Elaine and Erica seek out opportunities to work together as much as possible. We recently sat down with these two local legends to hear what a Les Délices recording project is like from their perspectives:

What is your role within Les Délices’ virtual concert recordings? 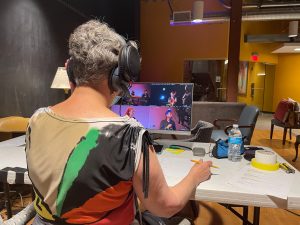 ERICA: I am the video producer and editor for each concert recording. I work with a team of 2 to 4 camera operators with whom I communicate over headsets during the filming to let them know what’s coming up in the music so they can focus on the important parts. I also interface with the audio producer, audio engineer and of course the artists so we can all work toward a common goal.

ELAINE: My role in Les Delices’ virtual concerts is that of audio producer along with Debra. As audio producer, I make sure that the musical performance is as excellent as possible, that the artists are comfortable so that they can do their best. I also assist in making sure that our recording engineer, Andrew Tripp, has the information he needs from me to capture the best possible sound. 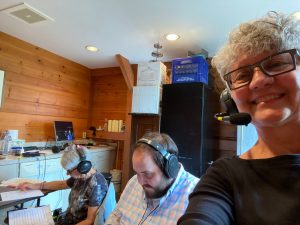 What’s the best part of your job?

ELAINE: 41 years in the music biz —- the best part of my job is co-creating with amazing humans who are dedicated to their art. I love making a difference and having fun. I cannot imagine a better way than producing music to have spent my career. I am VERY fortunate.

ERICA: By far, the best part of my job is working with the most amazing people! The artistry and the dedication of everyone that works on these projects is stellar. And it makes it so much fun! I think bringing classical music to people in new ways is the coolest thing and I’m so excited for people to get the chance to experience something they may not have known how much they could enjoy and love! 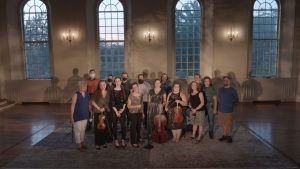 Winds of Change Musicians and Crew

Between the three different venues, frequent thunderstorms, air shows, fireworks, and of course the continued strictures of the pandemic, there were a lot of variables this summer! What were the challenges for you? 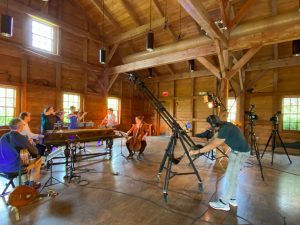 ELAINE: Let’s not forget the skunk walking through the garden at Dunham Tavern’s recording of Highland Lassie…  Each venue presents different sonic challenges and strengths. I am always looking for the most lovely, natural sound, while understanding that our excellent audio engineer, Andrew Tripp, will need to filter out various extraneous noises, add reverb where a venue is too dry, and do a bit of audio magic to enhance what we have. Since the medium is primarily to produce an intimate, inviting video experience, the audio must serve the video. BUT since we are working with high quality music, we also first want a stellar performance. So our teams keep all of that, and a time frame (we only have so many hours to accomplish each program) in mind.

ERICA: Last season, we filmed and recorded everything in the same venue, which gave us the opportunity to really hone in on what worked in that venue over the course of the season. This season, we started right off with 2 new venues and had to make them work very quickly. While we go in and scout ahead of time, we are basically making decisions about sound, lighting, camera angles, right on the spot and sometimes right up to minutes before we are ready to start recording. It’s an ambitious schedule to get done what we need to get done in the (usually) 2 days that we have. But Debra has prepared us well with the pre-production meetings and we hit the ground running, and everyone is excited to make the best project we can make with everyone committing themselves to their very best. But seriously, as Elaine said, sometimes you just have to laugh at all the curve balls thrown at you! The skunk was EPIC and it happened in the most tender part of the music, so I APPLAUD the musicians for keeping going without breaking up!

After the sessions finish, in a lot of ways the real work begins. What’s your process like after the recording wraps?

ERICA: Phew – how much time do you have? Just kidding – but a lot of work does go into putting them together. The audio is edited first and then that final audio is sent to me to put the video together in a musically representative way to enhance the listening and story-telling experience. Debra makes all the final artistic decisions based on what Elaine, Andrew, Mathias and I have put together. We also film the artists presenting “program notes” throughout the project, which gives insight into the music and invites the audience to listen in different ways. Those are incorporated into the project and we also create titles and credits using the season artwork and ultimately the complete package is ready. 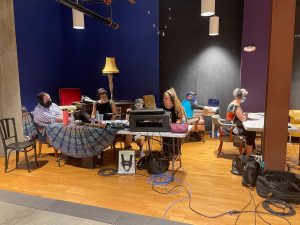 At the production table, Song of Orpheus

Les Délices’ recording projects have wrapped (for now!) so what’s next for you?

ERICA: I work as Apollo’s Fire’s video and audio producer, and we have a very busy season filming new concerts and recording a few new CDs. I produce ChamberFest Cleveland’s videos and will be preparing programs from the summer season over the course of the year. The Cavani String Quartet just filmed a Beethoven Quartet (with Elaine as audio producer) that will be part of their marketing for their Beyond Beethoven project this season, and I’m also producing a companion video series for their Art of Collaboration book that is coming out about chamber music. I am also in the middle of recording the Bach Cello Suites with René Schiffer, which we hope to have done by next year. I just partnered with Elaine on a solo Beethoven album with Gerardo Teissionniére that we recorded in Virginia. I am in the middle of a Mozart Piano Sonatas set with pianist Orli Shaham, and a Tango album with the artistic directors of the Boulder Bach Festival, Zachary Carrettin and Mina Gajic. Another project with Zachary and Mina will be recorded next spring in Boulder.

ELAINE:   I am producing The Cleveland Orchestra’s “In Focus” 2021/22 season (I did last year’s season and it was incredibly rewarding. You can hear it on their Adella app). I’ll be producing audio for 12 weeks at Severance Hall and one week in Miami. I am finishing a recording for Third Coast Percussion of music by Philip Glass, Gemma Peacocke (an excellent composer from New Zealand) and JLin (an electronic dance music artist). I’m slated to produce a new album at Abbey Road Studios in London in November of 3 composers: Clarice Assad, Sofia Gubaidulina, and Anna Clyde with the Philharmonia Orchestra. I just finished producing a lovely Beethoven Late Piano Sonatas album with Gerardo Teissonnière at an excellent recording studio, Sono Luminus (in Boyce, VA), and I am scheduled to record a fabulous young cellist, Santiago Canon Valencia, in a solo album of new music and arrangements by Santi of Albeniz’s “Asturias”, among some other things.

I am so grateful for the work with Les Delices because as the Pandemic hit last March, I was fearful that my recording days were over. I feel lucky to work with you, with Debra, with my long time colleague and partner in crime, Erica, with my beloved Cleveland Orchestra and with the many artists I have the privilege of calling clients and friends.

Thank you, Elaine and Erica, for sharing your talent and perspectives with us! Les Délices’ 2021-2022 Concert Series begins on Oct. 7th with the release of Song of Orpheus on Marquee TV. Subscriptions and Single Tickets are available now!