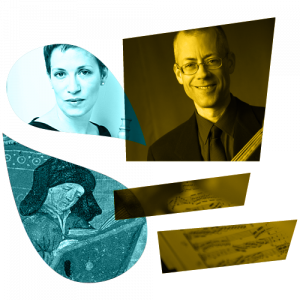 Longtime friends and collaborators Debra Nagy and Scott Metcalfe of Blue Heron have co-produced a range of Medieval projects over the years, including last season’s “mesmerizing” Les Délices triumph, Machaut’s Lai of the Fountain (now available on Marquee TV.) In this special episode of SalonEra, Scott and Debra celebrate the forthcoming release of Le Remede de Fortune, a new album collaboratively conceived and performed by Blue Heron and Les Délices. Machaut’s Remede is a long-form narrative poem with musical interpolations that tells the story of a young lover’s attempts to live well despite the capriciousness of Fortune. The episode features footage from live performances of Remede de Fortune along with other exclusive archival footage from LD and BH. We also take a closer look at the extravagantly detailed, evocative illuminations found in MS C, one of the most richly-decorated of Machaut’s surviving manuscripts.


Pykini: Plaisance or tost from Machaut's Lai of the Fountain (2021)

You’ll receive a link by email to view the show! It’s free to register with a $10 suggested donation per episode.

You can show your support by adding a donation to your free SalonEra ticket order or by donating at any time at salonera.org/support