Well-known for his collaborative work for the Cleveland Museum of Art’s annual Parade the Circle, Cleveland-based designer-builder Ian Petroni excels at building sculptural, site-specific sets and props that solve unique problems. Ian will conceive and create the sets and puppets for Into the Labyrinth and The White Cat, for which he will use different styles of puppetry – ranging from Japanese Bunraku to rod puppets – to portray different levels of characterization.

“The White Cat is certainly the most complex character in the story, which poses some unique and fun challenges. She needs to be quite expressive – so that’s something to consider particularly when it comes to designing her face and eyes. We also want to have some fun with what’s possible with the movement of her tail.” By comparison, the King is blustery, jealous, and a bit of caricature – this will be reflected in his larger-than-life physicality and heavy ornamentation.

We spoke with Ian about what he’s most looking forward to in the upcoming production. 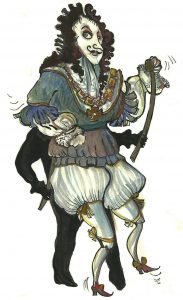 What are you most looking forward to about this production?

I’m most looking forward to performing with the live musicians.  I always love performing puppets with music – it contributes so much to bringing them to life.  Having live musicians who we will have rehearsed with, I think gives a great opportunity for interaction and play with the puppets responding to the nuances of the music and via versa.

What is or was the most interesting or challenging part or element in your work for this project?

It has been fun thinking through how the design of the puppets can be rooted in the art and fashion of Seventeenth century French, of Versailles while still feeling engaging and lively and not like something that has been boxed up in an attic since the Seventeenth century.  Being true to the period that inspired this work while also being true to myself as a contemporary artist has been a provocative challenge

As a Pastiche entertainment, Into the Labyrinth and the White Cat will take inspiration from various 17th and 18th century original sources. What styles or sources have most inspired you in the work that you will bring to the production? 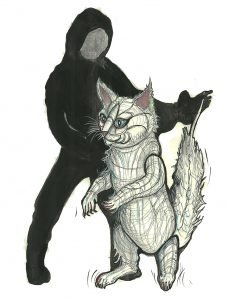 The etchings from that period have influenced my work in how I have designed the puppets.  I think the line work in those etchings is intriguing – the sort of tension between the almost scientific nature of the images and the expressive almost random chaos of the artist’s strokes.  Additionally the fashion style of the French Baroque court have influences how I designed the king and the brothers – not only in replicating the looks – but also I wanted the king puppet to move in a way that accentuates the feeling and intention of the style of the times.  If was fun to try to exaggerate what now feels comical about that style and the way a king would be required to move in all of the layers of lush fabric and finery. My hope is that this will lead to a very playful and entertaining puppet, that will illuminate the arrogance and self absorption of the king’s character.

In your view, what makes this show unique?

I think the approach of trying to really integrate the elements of the Pastiche is unique and exciting about this show.  It is very easy in multidisciplinary performances to have each element present next to each other but it is challenging and exciting to try to physically weave the different elements of the performance together, so that there is not a separation between musicians and puppets and visual projections.  I am looking forward to interacting onstage with the puppets and the musicians, and even having the musicians lend a hand in bringing the puppets to life.

What do you hope kids will take away or most enjoy?

I think all audiences will enjoy how the music and the puppets illuminate the fairytale.  I think music and puppetry are both great disciplines for the imagination – for presenting compelling images and emotions that beg the imagination of the viewer to embellish and complete.  I think the historical exploration of the music and the imagery and the context will interest audiences especially with how currently relevant and compelling I believe the performance will be.  I think the comedy and playfulness of the performance will be enjoyable and will open up the audience to some of the opportunities for quiet reflection and meditation that the story and the music provide the viewer.