Posted at 09:16h in News & Reviews by Debra Nagy
Share 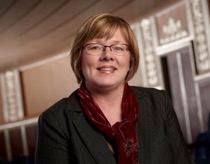 As General Manager, Carol Lee Iott will conduct the business operations of Les Délices while working together with Artistic Director Debra Nagy to meet strategic goals and position the organization for future growth. She will be responsible for fund development, marketing, event production, and general administration for the organization.

Ms. Iott comes to Les Délices after serving eleven years with the Cleveland Orchestra in the roles of Director of Strategy and Special Initiatives from 2014-2017 and Director of Orchestra Personnel from 2005-2014. Prior to that, she served as the Chicago Symphony Orchestra’s Director of Orchestra Personnel from 1995-2005. She also currently consults with arts and culture organizations in the Cleveland area. Ms. Iott holds a Bachelor of Arts in Music from Otterbein University in Westerville, OH, and a Master of Arts in Music Business Management from Columbia College in Chicago.

Commenting on the appointment, Les Délices Artistic Director Debra Nagy said, “Carol Lee Iott brings a wealth of arts management experience and perspective to this new position. Her extensive background with the Cleveland Orchestra makes her an asset for our organization. It is my pleasure to welcome Carol Lee to Les Délices.”