05 Apr The Magic of the Medieval Garden 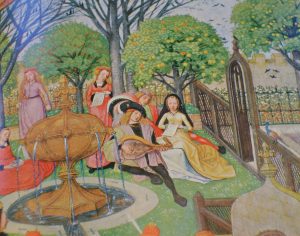 Our upcoming concert Machaut’s Lai of the Fountain (premiering April 8th) is inspired by the rare beauty of the medieval garden and its prized centerpiece – the fountain. A private garden encapsulated a sort of paradise not so different from the Garden of Eden and its centerpiece fountain was an artful combination of engineering and architecture: form and function came together to delight and entertain. Within the jardin d’amour (or garden of courtly love), fountains’ still waters reflected the world above while their gentle bubbling complemented the sounds of birds and the rustling of leaves. Fountains also symbolized purity and renewal while serving as a metaphor for life’s source and the divine. 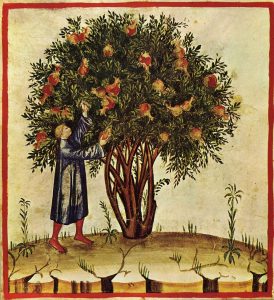 Considering the range of associations and symbolism represented in this concert’s beautiful and somewhat otherworldly music, we wanted to incorporate a sumptuous visual representation by drawing images from a range of both secular and sacred sources. Camilla Tassi’s video art design draws imagery from contemporary illuminated manuscripts that include the Roman de la Rose (c. 1405), small devotional books of hours (c. 1400), Machaut’s own collected work manuscripts (c.1350-1380), and a Tacuinum Sanitatis (c. 1400), which is an 11th century Arab medical treatise on health and natural remedies written by the Christian physician and philosopher Ibn Butlan of Baghdad (d. 1063) that was popular through medieval Europe. 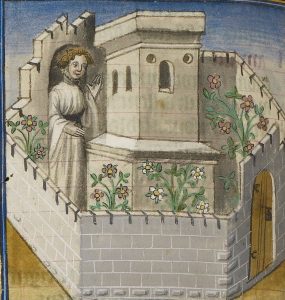 The image of the enclosed medieval garden would have resonated in the medieval imagination due to the popularity of the Roman de la Rose. The most-read book after the bible, the central action of the Roman de la rose takes place in and around a garden. When at first the narrator is invited in, he describes it thus:

NOT one word further did I say, But into the garden, straight away, I went, by the door that Idleness Had opened; full of happiness, Joy, delight, at what met my eyes; For it seemed an earthly Paradise, So delectable was all that place.

There were singing birds aplenty, Gathered there beyond its entry. In one place were nightingales, Starlings and jays in other vales, Elsewhere were crowds above, Of warblers and of turtledoves, The goldfinch, and the swallow, The robin and the wren below.

It seemed, so beautiful, so sweet, Twas more than birdsong, complete; Rather one might the song compare To Sirens singing through sea-air,

THE garden, within its compass, Held a square of trees and grass, For it was long as it was wide. No fruit tree did it lack inside, There were trees I remember, That bore pomegranate fruit, Which doth ill folks’ diet suit.

Fallow and roe-deer grazed here, And many a squirrel did appear, Clambering, among the trees; Rabbits too, they took their ease About their burrows all the day… 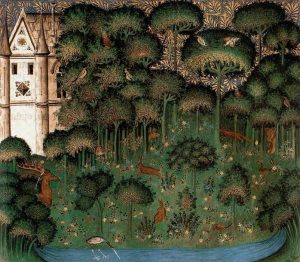 Such exquisite gardens were not just the stuff of dreams. In the late 13th century, Count Robert II of Artois created a 2200 acre game park and pleasure garden called the Park of Hesdin. A team of southern Italian gardeners and architects designed mechanized indoor fountains and a pavilion complex accessed by a bridge lined with automated monkey statues outfitted in badger fur.

Machaut even wrote about the Park of Hesdin in his Remede de Fortune:

“Surrounded and enclosed by high walls…remote spot, far from people…I walked along among the plantings, which were more beautiful than any I’d ever seen, nor will I ever see any so beautiful, so fair, so agreeable, so pleasing, or so delightful. And I could never describe the marvels, the delights, the artifices, the automata, the watercourses, the entertainments, the wondrous things that were enclosed within.”

“I wandered up hills and down until I came upon a valley in which I saw a fountain that was perfectly clear and beautiful, surrounded by trees and grass; and around it had sprung up a little hedge of wild roses.”

Don’t miss your chance to explore the symbolism and beauty of the Medieval garden in Machaut’s Lai of the Fountain, available online April 8-19th! Single tickets, just $8-$20, are on sale now!