04 Mar Meet the Women of Genius! 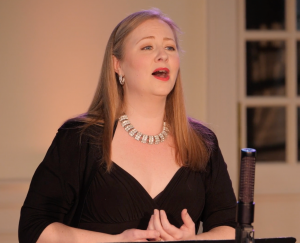 While harpsichordist and composer Elisabeth Jacquet de la Guerre is often upheld as a singular genius, in reality, she was one of a cadre of extraordinary female poets, performers, and composers who not only made their voices heard despite living in a profoundly patriarchal society, but exerted a stronger cultural influence than many realize. Along with Jacquet de la Guerre, Women of Genius honors Julie Pinel, Marie-Françoise Certain, Marguerite Couperin, and Mademoiselle Duval. While de la Guerre’s works and biography are well-preserved in a variety of publications, the other women come to us from the periphery of music history. Developing a fuller picture of their lives and influence requires digging a little deeper, reading between the lines and in the margins. Read on to discover more about these remarkable women and experience a piece of their legacy in Women of Genius, available March 18-29th. 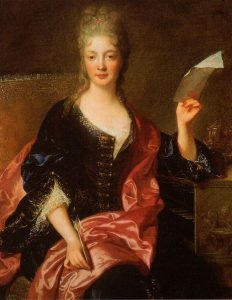 Elisabeth Jacquet de la Guerre (1665-1729) – Popularly known as the first French woman to ever compose an opera, (her Céphale et Procris premiered in 1694), Elisabeth Jacquet de la Guerre is the best-known women composer from the Baroque period. Born into a family of acclaimed harpsichord builders and court musicians, de la Guerre’s prodigious talents as a harpsichordist and composer were recognized and nurtured from a young age. As a five year old, Elisabeth sang and played harpsichord for an enchanted Louis XIV. At a later visit to the Court of the Sun King, she caught the eye of the King’s influential maîtresse-en-titre, Madame de Montespan. Subsequently, the teenaged Elisabeth resided at Court, in the orbit of de Montespan, for three years before leaving to marry Michel de la Guerre, an organist from an equally musical family. The couple lived in Paris, where Elisabeth quickly made a name for herself as a harpsichord teacher and skilled recitalist. She also began publishing her compositions under her own name. First, a collection of harpsichord solos written when she was just 22. Other publications followed, including sonatas for violin and harpsichord, collections of cantatas, and Céphale et Procris. All of Elisabeth’s published music was dedicated to King Louis XIV, who continued to act as her patron after she left Court. The King’s enduring attentions speak as much to Elisabeth’s political savvy as her compositional skill; in an era where the trajectory of one’s career could be determined by the Sun King’s capricious taste, Elisabeth Jacquet de la Guerre managed to thrive for decades. Indeed, it was after King Louis XIV’s death in 1715 that Elisabeth – then in her fifties – curtailed public performances and stopped publishing her compositions. She died a wealthy and well-established widow. Her surviving music shows her to be a composer with substantial gifts for expressive harmony, beautiful melody, invigorating rhythms, and astutely-balanced forms. In Women of Genius, audiences will hear her Judith, a cantata based on the life of the Old Testament heroine found in her first collection of cantatas (Paris, 1708) and a fantastic violin sonata from her 1707 collection. 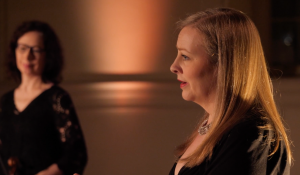 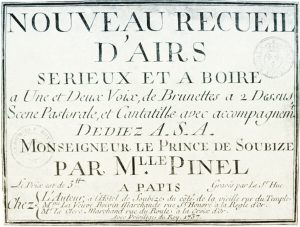 Julie Pinel (fl. 1730s) It is widely accepted, (though the historical record is admittedly scant), that Julie Pinel was part of the Pinel family of lutenists who were most closely associated with the House of Soubise but also performed regularly at the court of Louis XIV. This is supported by Julie’s dedication of her first book of airs to the Prince of Soubise, Charles de Rohan (1715-1787.) After securing an eight-year privilège, (no easy feat), Julie published two song collections within a year of each other. First, a book of airs in 1736, then Nouveau recueil d’airs sérieux et à boire in1737. Julie herself may have written many of the song texts included in the collections. As audiences will hear in Women of Genius, Julie’s songs are a heady mix of tuneful, pastoral beauty, delicate passagework, and moments of unabashed passion. 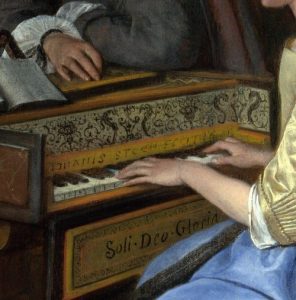 Marie-Françoise Certain (1661-1711) Marie-Françoise Certain was an extraordinarily gifted harpsichordist. Reading her biography and the firsthand accounts of her playing, one inevitably draws comparisons to that titan of 19th century keyboard music, Clara Schumann, whose prodigious talents also enabled her to escape some (not all) of the strictures imposed on women during her day. Marie-Françoise, educated from a young age by famed French opera singer Pierre de Nyert and mistress of Jean-Baptiste Lully, was so famous for herharpsichord playing that accounts of her playing and performances were preserved for posterity. Poets including Jean de la Fontaine wrote verses extolling her gifts:

Certain, in a thousand ways equally charming,
And in a thousand fine arts equally learned,
Whose rare genius and brilliant hands
Surpass Chambonnières, Hardel, the Couperains.

Her talent was the key to an independent and relatively unencumbered lifestyle. In an era where marriage was de rigueur, Marie-Françoise never married. Her weekly salons became the toast of Paris. She died having achieved an uncommon level of wealth and fame, beloved by the leading composers of the 17th century, and with a staggering instrument collection and library that included two double manual harpsichords.

Marguerite Couperin (1675-1728) The Couperin family dominated the French professional music scene from the 16th-19th centuries, producing some of the most brilliant and inventive musicians and instrument builders generation after generation. The enterprising Couperins prioritized multi-faceted musical instruction for their offspring, including the girls. Marguerite soon attracted attention for her harpsichord playing and especially beautiful singing, ultimately collaborating with her cousin François and uncle Louis to perform sacred vocal pieces written especially for her in the 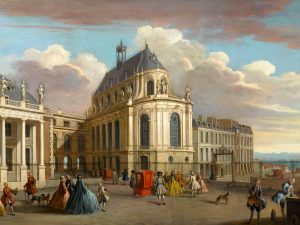 Royal Chapel at Versailles and in other elite churches in Paris. In those days, it required special permission for women to play music or sing during church services. Women of Genius features a solo verset composed for Marguerite’s voice, written by Louis Couperin. Noted biographer of the French poets and musicians of his time, Titon du Tillet described Marguerite-Louise as “one of the most celebrated musicians of our time, who sang with admirable taste and who played the harpsichord perfectly.” 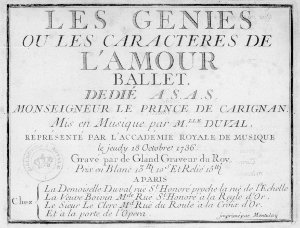 Mademoiselle Duval (1718 – c.a. 1775) – Vanishingly little is known about Mademoiselle Duval, (we don’t even know her first name), but it is certain that she was the second woman to have an opera premiered at the Paris Opera. Her Les Génies, ou Les caractères de l’Amour premiered in 1736, forty years after Elisabeth de la Guerre’s Céphale et Procris. While the libretto was widely panned, Mlle Duval’s music was compared favorably to Rameau’s fiercely beloved Les Indes Galantes. Interestingly, another review from the time makes clear that Mlle Duval herself played the entire opera from the harpsichord. Though there is some confusion caused by the preponderance of the surname “Duval” in the records, it seems that Mlle Duval’s multifaceted career always revolved around the opera house. In addition to her talent for composing and harpsichord playing, she was regularly featured as both a singer and dancer in Paris Opera productions. She retired on a pension, having worked as a professional musician on the Paris Opera for decades. In Women of Genius, audiences will experience an instrumental suite from Duval’s Les Génies.