Posted at 12:08h in Press by Jane Leggiero
Share 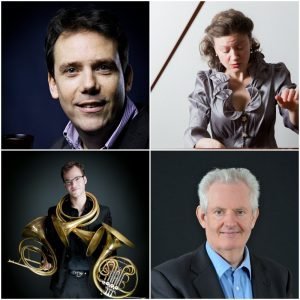 Mozart called his Quintet K. 452 for piano and winds “the best thing I have written in my life.” This program offers a rare opportunity to hear Mozart’s masterpiece performed on instruments Mozart would have known alongside Beethoven’s Op. 16 Quintet for the same instrumental forces.

While audiences had the opportunity to experience the brilliance and clarity of the 18th Century fortepiano last fall, Classical winds and brass are something new. Mozart & Beethoven Quintets will provide an ideal setting for audiences to discover and experience the extraordinarily colorful sound of a stopped natural horn or the unparalleled transparency and sweetness of a classical clarinet.

Nagy had long wanted to share the unique sound of Classical woodwinds with Northeast Ohio audiences, but assembling just the right team was tricky. Classical woodwinds are fundamentally different from their modern counterparts in the symphony orchestra and, as Nagy explained, “Great natural horn players (that is, playing without valves) as well as Classical clarinet and bassoon players are extremely rare birds! I began by asking the amazing Dutch bassoonist Wouter Verschuren to join me for a project in Cleveland and he suggested asking clarinetist Colin Lawson (who literally wrote the book on the Classical clarinet!). I then invited my incredible colleague Todd Williams (principal horn at Boston’s Handel & Haydn Society and teacher of natural horn at the Juilliard School) and we’re thrilled to work again with Sylvia Berry, who joined us last year for Mozart in Paris-Part 2.”

British expert Colin Lawson will perform on a 10-key Classical clarinet whose wide spectrum of colors ranges from soft and muted to clear and trumpet-like. Only reaching its first stage of maturity as an instrument during the Classical period, the clarinet – and particularly its player Anton Stadler – inspired Mozart to declare, ““I have never heard the like of what you contrived with your instrument. Never should I have thought that a clarinet could be capable of imitating the human voice as it was imitated by you. Indeed, your instrument has so soft and lovely a tone that no one can resist it…”

Dutch bassoonist Wouter Verschuren is a passionate advocate for early versions of his instrument. Verschuren explained, “the modern bassoon has many more keys than its classical counterpart. While the extra keys contribute to a more homogeneous sound, the particular colors and characters of playing in different keys was lost.” He added, “There’s nothing so satisfying as playing Mozart on period instruments – and with great colleagues!”

The natural horn is an amazing instrument whose unusual features were used as assets by composers like Mozart and Beethoven. Because of the lack of valves, natural horn players use special hand-stopping techniques to achieve notes not found in the natural harmonic series. This results in a rather uneven quality, whereby  “blue” notes stand out in remarkable and surprising ways.

The instrumentation of piano with oboe, clarinet, bassoon, and horn is virtually unique in the repertory – with the exception of Mozart’s and Beethoven’s famous quintets. Les Délices will also explore the history of these two masterpieces, questioning the relationship between the two and whether Beethoven was directly influenced by his older colleague.

Les Délices continues to make a big impact throughout Northeast Ohio with entertaining, thought-provoking programs presented in unique and intimate settings that enhance the listening experience.

Remaining 2019-20 concerts offer an exciting array of unique music and extraordinary artists. Lessons in Love (Jan 16-19, 2020) features hypnotic late-medieval music from the world of the Romance of the Rose, presented in collaboration with Boston’s Blue Heron. Torchsongs Transformed (Mar 6-8, 2020) brings Les Délices’ innovative baroque-jazz fusion program to a new level with fresh songs and arrangements featuring soprano Hélène Brunet and members of L’Harmonie des Saisons (Quebec). And in April 2020, a fabulous creative team including puppet designer Ian Petroni (of CMA’s Parade the Circle) and Shawn Keener (visual display) will bring to life Aesop’s fables and 17th Century fairy tales when we present Into the Labyrinth and our family-friend program The White Cat (April 23-26, 2020).

About The Guest Artists

Philadelphia native Sylvia Berry is one of North America’s leading exponents of the fortepiano. Hailed by Early Music America as “a complete master of rhetoric, whether in driving passagework or [in] cantabile adagios,” she is known not only for her exciting performances but for her engaging commentary about the music and the instruments she plays. In addition to a lively performing career, she is also the founder and artistic director of The Berry Collective, a period chamber ensemble featuring repertoire spanning from Schobert to Schubert.

Colin Lawson is Director of the Royal College of Music, London. He has an international profile as a period clarinettist and has played principal clarinet in most of Britain’s leading period orchestras, notably The Hanover Band, The English Concert and the London Classical Players, with whom he has recorded extensively and toured worldwide. Described as ‘a brilliant, absolutely world-class player’ (Westdeutsche Allgemeine Zeitung) and ‘the doyen of period clarinettists’ (BBC Music Magazine), he has appeared as soloist in many international venues, including London’s major concert halls and New York’s Lincoln Center and Carnegie Hall.

Hailed by Gramophone for his “impressive horn playing,” Todd Williams is an active performer and educator based in Philadelphia. A leading exponent of the Natural Horn in America, he serves as Principal Horn of numerous ensembles across the country including the Handel & Haydn Society, Boston Baroque, Trinity Baroque, Clarion Society, Apollo’s Fire, Mercury, Opera Lafayette, Tempesta di Mare, and more. This season he’s served as guest principal for Tafelmusik (Toronto) and the American Bach Soloists (San Francisco) and procured future solo engagements with Philharmonia Baroque.

Historical bassoonist Wouter Verschuren regularly performs throughout Europe and the U.S.A and is at home with repertoire ranging from the Renaissance to the Romantic. He is principal bassoonist of The Amsterdam Baroque Orchestra conducted by Ton Koopman, and regularly plays with other renowned period orchestras such as The Orchestra of the Age of Enlightenment, The Orchestra of the 18th Century, La Petite Bande and The Academy of Ancient Music.